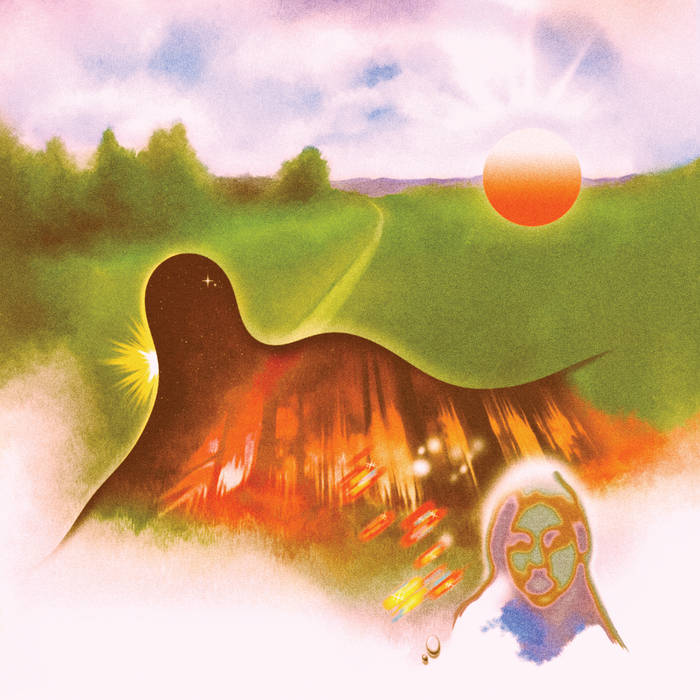 "...Let’s just say that the year is 2003, and we’re finally meeting the protagonist of this story, a young aspiring post-post-post-punk musician playing guitar (and burning CDRs) in his suburban Kentucky bedroom. Born Michael Andrew Turner, he will cycle through a series of punk names (all gates open), the informal (Mikey Turner), the literary (M.A. Turner), the androgynous (Ma Turner), the mystical (Mazozma). Thanks to the internet, his musical practice can now easily be influenced by, let’s say, the American and European avant-garde theater of the 1950s, the global avant-psychedelic rock underground of the late 1960s, the singer-songwriter outlaw country of the 1970s, the hardcore punk of the 1980s, and from the 1990s both the Lollapaloozoid MTV grunge iceberg tip (with the punk/indie underground massive beneath the water) and the weirdo Bananafishfood noise from San Francisco and Japan and Europe and everywhere else. Not only that, he can start his own band that plays music influenced by all of those things all at once, make prolific recordings of said music, and send it all right back onto the internet (via CDR, cassette, sometimes even vinyl and CD) to create a living subcultural feedback loop.

Mikey has indeed done all of that, and is still doing it, non-stop for almost 20 years now, but he did it first in 2003 with a band he called Warmer Milks, a strange and powerful little combo formed in the college town of Lexington, Kentucky. I think a band like Warmer Milks could only have been possible in the 2000s, and in a place like Lexington. Away from the economic pressure and scenester conformity of the coastal media centers, yet still with full access to the entire world of the internet, people in such a place have the potential to be as artistically free as you can get under late capitalism. Just check out Lexington bands from the period like Hair Police, Eyes and Arms of Smoke, Cadaver in Drag, Ara, Jovontaes, and Jeanne Vomit-Terror. All pretty damn weird and creative (and yes, Trevor Tremaine is in at least three of them), but my vote for weirdest of them all, and in the most varied and fascinating ways at once, is still Warmer Milks.

I first heard the Milks when a slim jewel-case CDR with a hand-made cover showed up at the Blastitude address circa 2005. The cover art included hand-lettered text in a creepy abstracted (which is to say unreadable) John Olson/American Tapes style, and the (readable) title on the inside cover was the rather terrifying phrase Family Corpse of God, so I had a pretty good idea what I was in for, but upon listening was surprised to find it wasn’t just another harsh basement noise release by the latest Wolf Eyes Junior band of the day. Quite the contrary, almost every track contained actual guitars playing actual guitar chords, and a couple of ‘em even had heartfelt vocals. At least three of the five tracks saw a wider release the following year; the first two were the inscrutable avant-folk miniatures that made up the “Rwanda” b/w “Walken Agoraphobic Penn” 7-inch single (with rather lovely artwork by the same Robert Beatty who designed this very sleeve you are now holding), and the 30-minute album-closing epic track “Penetration Initials” was released as a stand-alone single-track album (on Beatty’s CDR label Mountaain, and yes, that’s two a’s). Hearing “Penetration Initials” was when I knew this band and bandleader were something special. Not only was it not noise, it wasn’t even noise rock. This was some kind of unsettling highly progressive folk-infused (but not folk-limited) avant-garde everything-music, something I enjoyed but did not yet understand.

To be honest, I still don’t, but I’ve never stopped trying. I interviewed Mikey for what was then the next issue of Blastitude (#19, January 2006), and he brought up the album Warmer Milks had in the can, the band’s first real full-length, not quite released yet at the time of publication. I was still in awe of the haunting folky vibes of “Penetration Initials,” but he was warning me not to get too comfortable: “It's a single LP entitled 'RADISH ON LIGHT.’ Anything gross about what we have ever done before is merely a starting point. Total damage.” Radish on Light did indeed come out a few months later, released by 2000s noise rock ambulance chaser Troubleman Unlimited, and if anything, gross and damaged-sounding was an understatement. The record was in fact almost inexplicable. You could throw out a few basics and not be entirely wrong; “stoner,” “doom,” whatever, but it definitely wasn’t metal, or any other immediate genre either. It was a churning, boiling, seething pit of unholy feelings and thoughts and pain. There was a track called “Pentagram of Sores,” for gods’ sake, and the music for it was even scarier than the title...

At this point, it was understandably hard to know what was going to come next, but I still don’t think we were prepared for the 2008 release of Soft Walks. It was normal to be puzzled by each and every Warmer Milks release, but this one was even more puzzling than usual. Not because it was weirder, but because it was less weird. Not because it was more lo-fi, but because it was more hi-fi. I listened to it a lot at the time, but never even managed to write a review of it for Blastitude. One preeminent underground noise rock record label, that loved Radish on Light and was hoping to release part two, reputedly went from “can’t wait!” to “hard pass” immediately after it was submitted.

The label that did not pass on Soft Walks was the great and perpetually underrated Animal Disguise (many fine records by Mammal, Viki, Sic Alps, Hair Police, Cadaver in Drag, Charles Lareau, lots more), who released it on CD only in 2008. Here it is 13 damn years later in 2021 and I’m still not sure how to describe this album, but now that I’m writing liner notes for it, I should probably figure something out quick. How about this: if Radish on Light was Warmer Milks’ Badlands, then Soft Walks was definitely their Days of Heaven. Okay, maybe the Malick geek in me is forcing that one a little. Let’s face it, Radish was a lot more like Hellraiser (1987, d. Clive Barker) than it was Badlands, but Soft Walks is definitely no Hellbound: Hellraiser II (1988, d. Tony Randel). Coming after Radish, Soft Walks is a slow sunrise after the long dark night, revealing that the blasted infernal landscape of your nightmares was actually a gentle sea of rolling golden-hour wheatfields all along. The proverbial amber waves of grain, if you will. I guess you could say it was Mikey’s country-rock move.

Indeed, at first blush, or from a comfortably distanced vantage point that was simply not possible with Radish, Soft Walks was nothing less than a professionally produced quasi-orchestral Nashville-style alt-country record. Mikey brought guitarist Travis Shelton and drummer Greg Backus from the Radish band, but otherwise changed things up with two new key players, Shawn David McMillen and Paul Oldham. McMillen was a Texan guitarist who had been in a Charalambides-adjacent group called Ash Castles on the Ghost Coast (great self-titled CD release in 1996 on Wholly Other), and has gone on to record boldly fried singer/songwriter LPs throughout these next twenty years, such as Catfish (2005, Emperor Jones), Dead Friends (2010, Tompkins Square) and On the Clock w/JJ & Mitch (2015, 12XU). He met the Milks when they were on tour, and pretty much pulled a Rollins and got in the van as a second/third guitarist, a tenure that included the Soft Walks sessions. As for Paul Oldham, he was on Mikey’s radar from his Kentucky band Speed to Roam, and from playing sideman in some iterations of his brother Will’s Palace project. Oldham not only hosted and recorded the sessions at his own secluded countryside Rove Studio, he also played some very solid country-rock bass throughout the album. Indeed, it’s remarkable how much “country-rock orchestration” can be implied and created by just a few simple additions: a bass guitarist playing strong root notes; a third guitarist conversant in popular country/blues/folk/rock forms; a member or two that can also slide over to occasional delicate piano and other instruments in the mix (is that melodica on “The Turth”?); and, last but not least, actual arranged backing vocals (including the Milks’ first female vocal presence in the person of Amber Kingsley).

That said, even as this professional and relatively harmonious recorded sound comes out of the speakers, even after the wistful, plaintive, unassuming and lovely short instrumental opening track “I See the World Tonight” has fanfared its way into the second track, the first with vocals, the anthemic yearning “Wild Spring,” things still don’t feel settled. Just because it’s daytime doesn’t mean the dark has been transcended. The sickness and nerve damage that Radish exposed is still there, even if hiding somewhere behind the amber-grain exterior. You can hear it in Mikey’s impassioned singing, certainly more refined and high-functioning than the raw cackling and gargling possession ceremonies of Radish on Light, but still with something woolly, sad, forlorn, and exposed in his voice, hung on that intense emotional crossover point where yearning might become yowling or yelping but never quite makes the full transformation.

But, even as Mikey’s voice reflects doubt, the lyrics want to believe and to cope, and to do it by practicing patience and acceptance. “Wild Spring”: “If the clouds come out this time/It’s just a shift in daily prime/Merely another color on/The page.” In “The Friends,” the lyrics express a desire for sobriety: “The friends all decided/To take some time/Gather up their plans/And put down their wine.” In “A Bulb in the Dark,” the theme of acceptance continues, possibly an understanding of the Buddhist precept that all life is suffering: “Won’t get too torn and mangled/Yet days are tangled/That’s just the way it goes.” In a nutshell, from “Patio’s Blues”: “One must pay up on these dues/I must embrace these/Certain Blues.”"