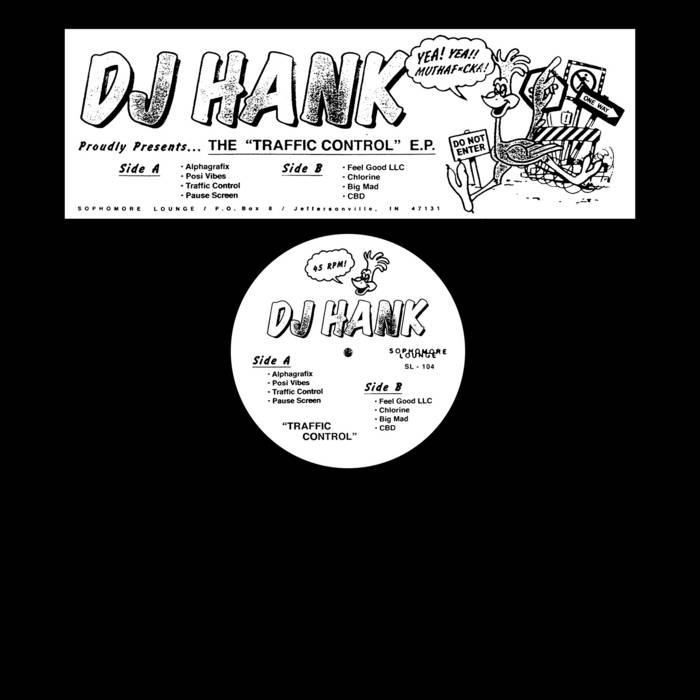 Heavee Hank you unleashed the beast on Traffic control. Really proud of you for the range and versatility as well as being able to remain relevant and elevate as an artist. Excited to see more from you in the future! Favorite track: Traffic Control.

On his debut 12" EP, Chicago producer and bike messenger DJ HANK captures the feeling of racing against traffic and, as he puts it, "trying to make it out alive with the chaos of the city going around you.”

DJ Hank grew up in North Carolina. As a teenager, he began making rap beats on pirated music software while also DJing and playing keyboards in experimental punk band Whatever Brains. In 2011, at age 18, Hank moved to Chicago to pursue a career as a bike messenger. In a city dominated by 21+ clubs and venues, Hank gravitated to the famous footwork hub Battlegroundz due to it’s all-ages inclusivity and raw energy. DJ Rashad, DJ Spinn and other luminary figures of the footwork community spun weekly, while dancers spanning multiple generations and crews battled it out on the dance floor every Sunday.

Through the underground network of Chicago footwork events, Hank became a friend and frequent collaborator with international footwork collective Teklife. He has released music on Teklife’s record label but isn’t a member of the group itself. In similar fashion, he's loosely affiliated with dance group Take Ova Gang (TOG) founded by DJ Manny. Hank maintains a fluid relationship with the footwork culture from which his sound draws. Beyond collaborating with his friends, Hank has collaborated with Chilean rapper Catana, Berlin-based DJ Paypal, and Floridian DJ Orange Julius.

On "Traffic Control," however, Hank explores a wide range of sounds, from melodic to experimental, influenced by everything from UK Garage and Grime to Ghetto House and Snap music (or Southern Hip hop production in general). Artists like Kode9, MachineDrum, and Sherelle have been supporters of Hank’s music, playing his tracks throughout multiple recorded sets. In a live setting, Hank has shared the stage with such influential acts as Loefah, DJ Deeon, Sporting Life, DJ Spinn, and Traxman.

"Traffic Control" describes the feeling of navigating through the city dodging cars. Its opening track, "AlphaGraphix" is named after a bike messenger client that calls in delivery requests early each morning. “CBD” alludes to the Central Business District which Hank navigates regularly. "I love the way being a bike messenger puts me in tune with the city and how it allows me to meet all different types of people," Hank enthuses. He tried making earlier versions of the EP's title track, composed using a dizzying array of car alarm sounds, when he was younger, but it didn't really come together until a couple of years ago.

"Posi Vibes" speaks to more of Hank's inspirations - cell phone beats and samples. The vocals were taken from a rapper's Instagram post. The track's title is tongue in cheek -- Hank put it together after a less-than-amicable phone conversation, in an attempt to turn the situation around and laugh about the experience. “Pause Screen” rounds out the A-side with a refreshing calmness, combining hazy video game sounds with an ambient idling where time stands still.

Pioneering footwork DJ and producer Jana Rush has been a friend and mentor to Hank. She introduced him to Ryan Davis (Sophomore Lounge) after performing at his Cropped Out festival in 2018, at which point Davis felt an immediate connection with Hank's sound and aesthetic. Upon their initial conversation, the world shrank as Davis and Hank realized they had mutual connections with the band PC Worship, among others they had met by way of the underground touring circuit.

Hank produces no shortage of remixes, edits, and bootlegs, but here, on his first vinyl release, he focuses on original material with more subtle sampling employed. Juke artist Tony MoonDoctoR mastered the release to sound crisp while retaining its footwork-friendly heavy bass. Hank is the first to admit his music is out there. "It's something that's kind of different," he concludes. "Hopefully it's 'What the fuck?' in a good way."

All tracks by DJ Hank. Mastered by MoonDoctoR. Art by Matt Bellosi.